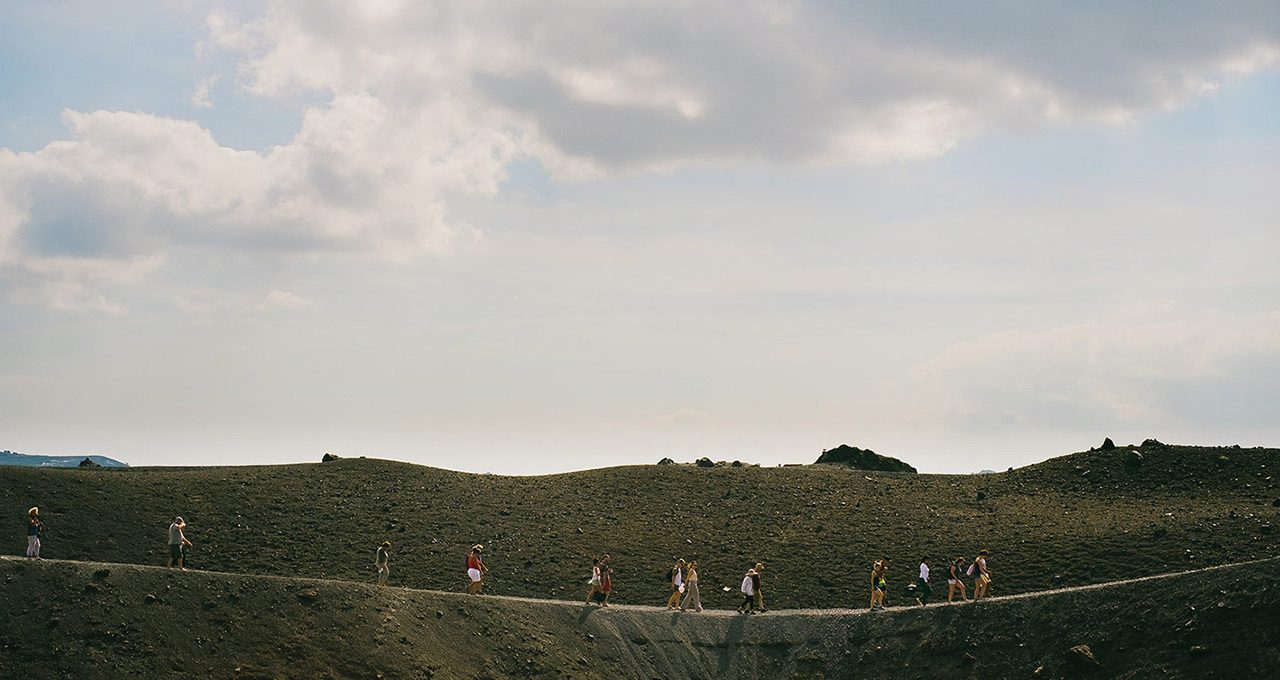 Walk on the volcano

Santorini with the impressive volcanic Caldera and the famous stunning sunset is a gifted island of exceptional natural beauty with many attractions. Whereas it is considered an exemplary romantic destination, ideal for couples and newlyweds, it is actually a place for everybody thanks to the diversity of the island that offers a variety of activities and things to see and explore.

The most popular attraction of Santorini is the volcano. It is an underwater active volcano but there are two residual volcanic islands, Palaia Kammeni and Nea Kammeni, opposite Santorini. Before the several volcanic eruptions that occurred throughout the years, some of which were submarine, the size and the shape of Santorini were quite different. It was a much larger, round island, hence its name used to be Strogili (=circular).

Today the result of these eruptions is the creation of five separate islands, Santorini, Therasia, an uninhabited island called Aspronisi and the volcanic islands of Palaia Kammeni and Nea Kammeni. They compose a nice sight across the Aegean Sea, facing Santorini, and you can visit them as well. The existence of the volcano is visible all over the island of Santorini, especially on the bizarre beaches that are covered, in their majority, in black sand and pebbles made of solidified lava. The red volcanic rocks in Red beach, which reminds a lunar landscape, form a rare sight.

On the island of Palaia Kammeni there are hot springs known for their beneficial and therapeutic effects. The waters there contain sulfur and you can please yourself with an alternative mud bath. It is necessary that you swim in these waters to take your experience to a whole new level. To top it all, from there you can admire the breathtaking caldera from a different point of view that will completely amaze you.

Travel in time at Ancient Thera

Fira is the beautiful capital of the island and the biggest and most cosmopolitan settlement of Santorini. It is located in the western edge of the island, opposite the volcano and the two volcanic islands, Palaia Kammeni and Nea Kammeni that lie in the sea. Fira is a combination of natural beauty, social life, night life, and shopping, where you can feel the liveliness of the island and where all the action takes place. What makes it so ravishing is the Caldera view that leaves visitors speechless anytime of the day.

A walk to the scenic alleys during the daytime will fill you with harmony, while at night you can find yourself in the middle of a big party. There is a wealth of restaurants, cafes, bars and clubs where you can relax and enjoy the tremendous view or dance and have fun. It actually owns the greatest dining out and entertainment selection of the island and the largest shopping center, too. Moreover, there are many clothes shops, gift shops, souvenir shops, supermarkets and other facilities for every need.

Choose the colour of the beach

The beaches in Santorini are extraordinary, unlike other Greek islands, most of them covered in black sand, forming a part of the island, as the colour of the sand is a result of the volcano. The past volcanic eruptions not only shaped the island but also gave it its unique character and part of its natural, extraordinary beauty. As a result, the beaches are distinct as well, as they are covered in volcanic rocks and sand. There is a diversity of colors and the landscapes they create; white, red and mostly black sand and pebbles adorn the beaches in Santorini.

The dissimilar beaches all along the island will please everybody. There are well-organized, cosmopolitan beaches that offer all one needs for a relaxing and entertaining day at the beach. More serene and less famous beaches ideal for families can also be found or even remote and unspoiled ones for calm and private moments. Above all, there are some indescribable beaches, not all that easily accessible, surrounded by rock formations that compose wild sceneries and, finally, perfect diving areas that will satisfy adventurous travelers. 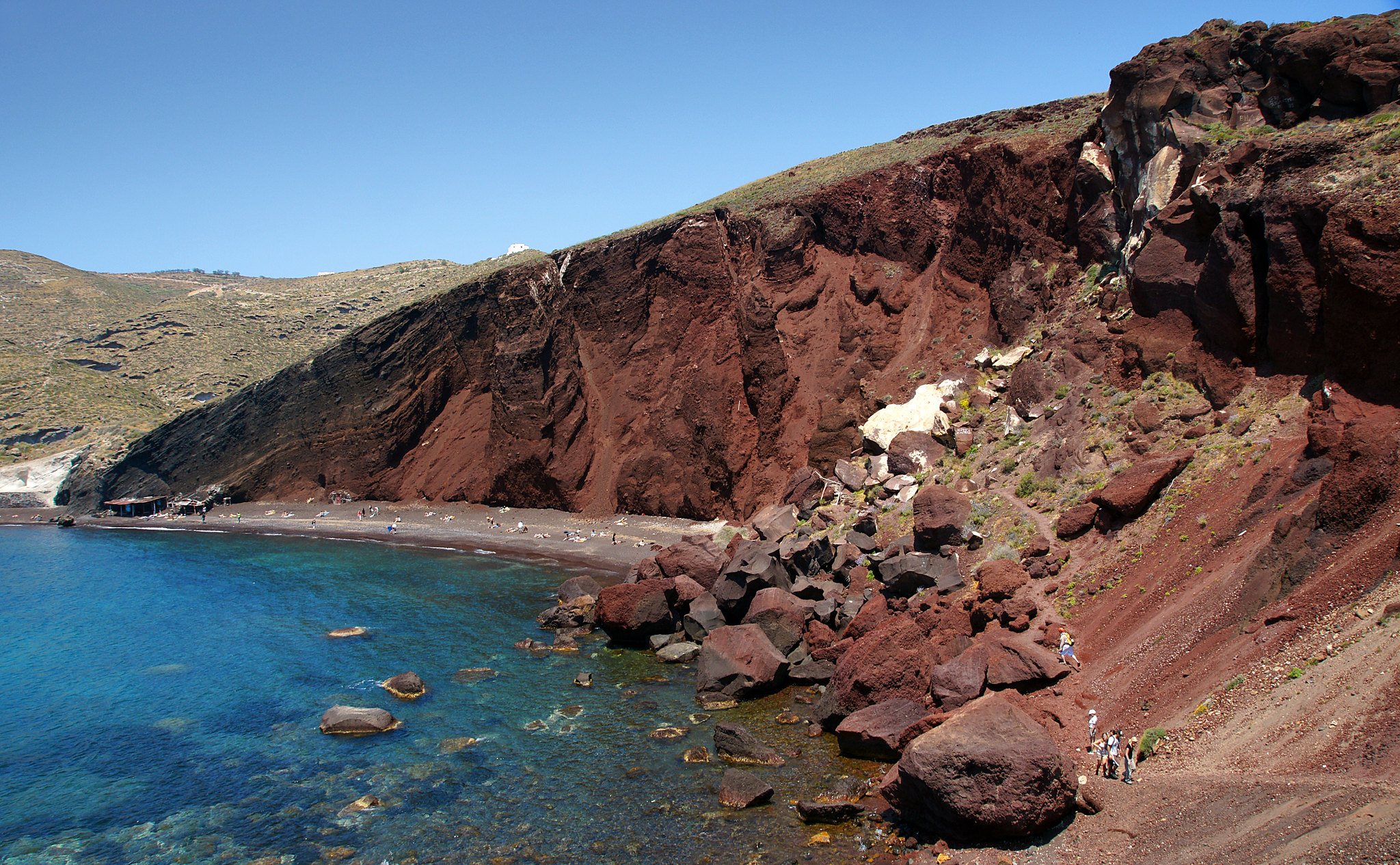 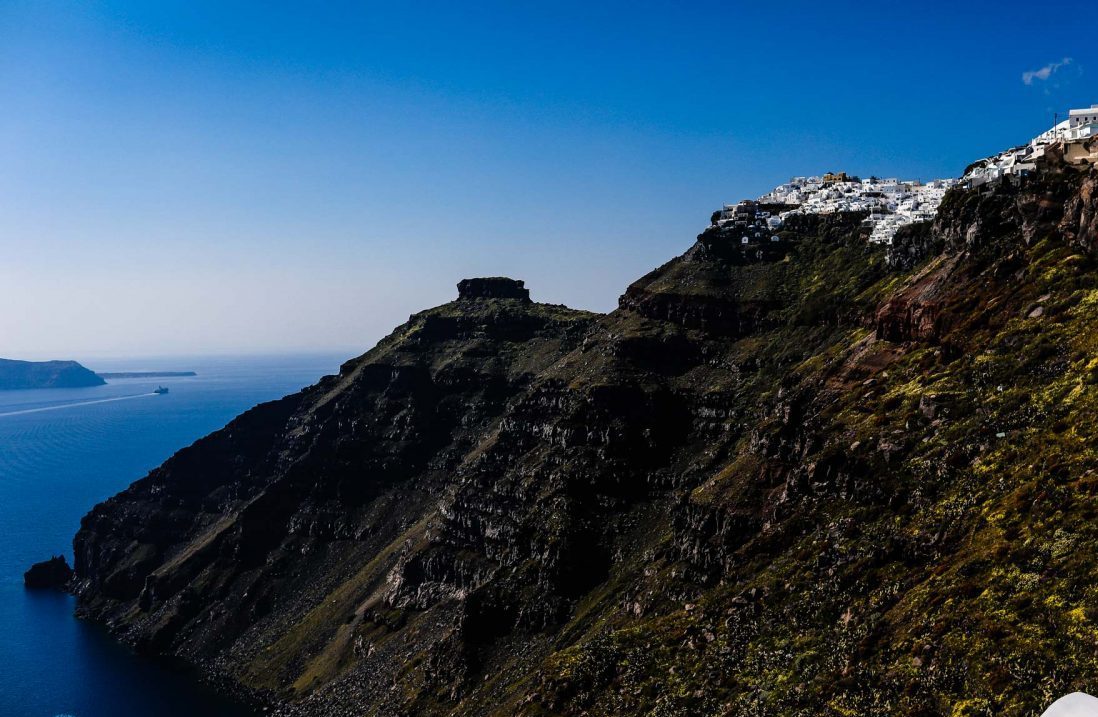 The Medieval rock of Skaros

For those interested in art and history, Santorini owns 8 different museums that transfer the culture and evolution of the island throughout the years. The Archaeological Museum of Thera and the Ancient Thera Museum keep the history of the island alive.

The island of Santorini holds an archaeological wealth that visitors, especially those interested in history and culture, can admire and become acquainted with in the various exemplary museums. Santorini owns many museums scattered all over its beautiful villages. They display notable discoveries that demonstrate the long history of the island and its prominent presence. The rich tradition of Santorini is depicted in precious collections that include rare and valuable exhibits.

Two museums of great importance are the Archaeological Museum and the Museum of Prehistoric Thera where exceptional artifacts and finds from the excavations on the island can be found. The Mansion of Argyros, a distinguished neoclassical residence, has been transformed into a museum that transfers visitors to the 19th century. Another jewel is the Folklore Museum which boasts an old winery, a library, an art gallery and a lovely chapel. The naval history of Santorini is revealed in the Naval Maritime Museum through books, documents and nautical equipment. The Icons and Relics Collection presents priceless ecclesiastic items that date back to the 16th, 17th and 18th century. A different museum is that of Minerals and Fossils where invaluable collections from Greece and the rest of the world are kept. Amazing multi-purpose tours are held at the Wine Museum, where guests have the opportunity to taste and learn more about the renowned product of Santorini.

These and more treasures along the island are indubitably worth a visit as they unfold the momentous legacy of Santorini and so they can enrich your knowledge and offer a remarkable experience.

Be charmed by Santorini wineries

Santorini is a unique wine-growing region where the volcanic, mineral-rich soil in combination with the climate creates uncommon, high quality wine varieties. The island has vast plantations of vineyards, which are the oldest in the whole world, and a huge production of wine, including rare types that own distinct characteristics but share the same rich flavor. Wine holds a special position among the acclaimed local products of Santorini and stands out for its quality and phenomenal taste. As a result, its wine is globally adored and has managed to win over even the most demanding wine lovers.

The island of Santorini brims with wineries where a visit constitutes a spellbinding experience. They are worthy representatives of the great wine-making tradition. Α visit in a winery, or more, is a memorable luscious journey among exceptional flavors and aromas. Besides the passionate wine tasting and the chance to try many voluptuous varieties, the wineries provide tours where guests can become acquainted with the history and production of wine in Santorini. What is more, they can explore the vineyards and learn the secrets of making these fine varieties. The atmosphere is cozy and friendly, in wonderful surroundings and some of them offer astonishing views. Find out your favorite type and make sure to take a bottle with you so that excellence can accompany you at home.