The Millennia Tour: Santorini Through the Ages

Through the ages, life on Santorini, like the volcano lurking beneath the islanders’ feet, has been dynamic, unpredictable and impressive.

The earliest inhabitants of Santorini (Thera) arrived by at least the 4th millennium BC. Over time, more and more people migrated to the volcanic island, settling in particular on a peninsula (“akrotiri”) at the island’s southern end, near a natural harbor. In the Early Bronze Age, from ca. 2500 BC, the site of Akrotiri became increasingly prosperous and architecturally elaborate – an urban center and maritime hub whose civilization peaked in the Middle and early Late Bronze Ages (ca. 2000-1625 BC). In the last quarter of the 17th c. BC, a massive eruption changed everything, burying the town of Akrotiri beneath meters of fallen ash. Thus was created one of the Mediterranean’s great archaeological sites. Covering about 200,000 square meters (20ha), it represents a sealed time capsule of Aegean Bronze Age life. 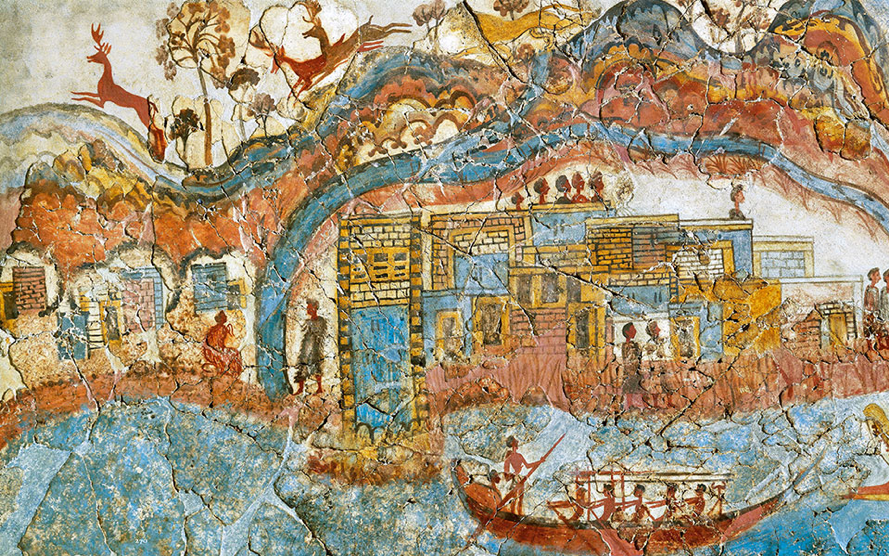 Akrotiri was heavily influenced by the Minoans of Crete, who likely were frequent visitors to the town or permanent residents. Cultural affinities with the Minoans included a light-spirited appreciation of nature and life, reflected in the many colorful frescoes so far recovered. In addition to lush landscapes and images of dolphins, monkeys and boxing boys, there are scenes from a naval battle, indicating that life on Santorini wasn’t always serene.

Minoan influence is evident, too, in the multi-storied constructions, suites of rooms with multiple doors, light wells, lustral basins and sophisticated water-sewer system. The excavations have yielded a trove of artifacts, but the inhabitants themselves, perhaps warned by preliminary earthquakes, seem to have escaped before the final cataclysm.

After the great eruption, mainland (Dorian) Greeks colonized Santorini in the 9th and 8th centuries BC. Geometric-era graves and pottery reveal that the island’s new center was now on the hill of Mesa Vouno, at Ancient Thera, near the island’s east coast. The town flourished in Archaic times (7th-6th c. BC) as well as in Hellenistic times (3rd-2nd c. BC), when the Greek rulers of the Ptolemaic Kingdom in Egypt exploited its port as a strategic naval base. Since 1895, archaeologists have unearthed paved streets, courtyard houses, a theater/council house, gymnasia, an agora, public buildings and temples and shrines dedicated to Greek or Egyptian gods. 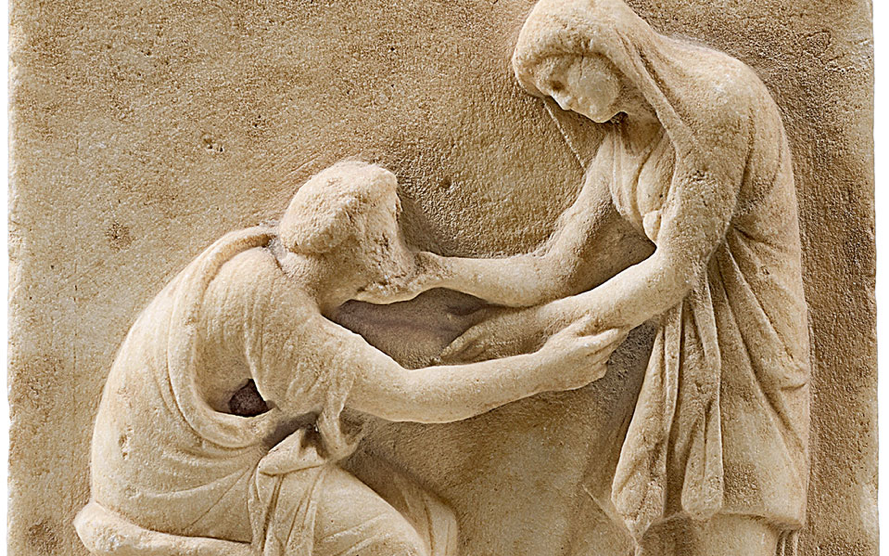 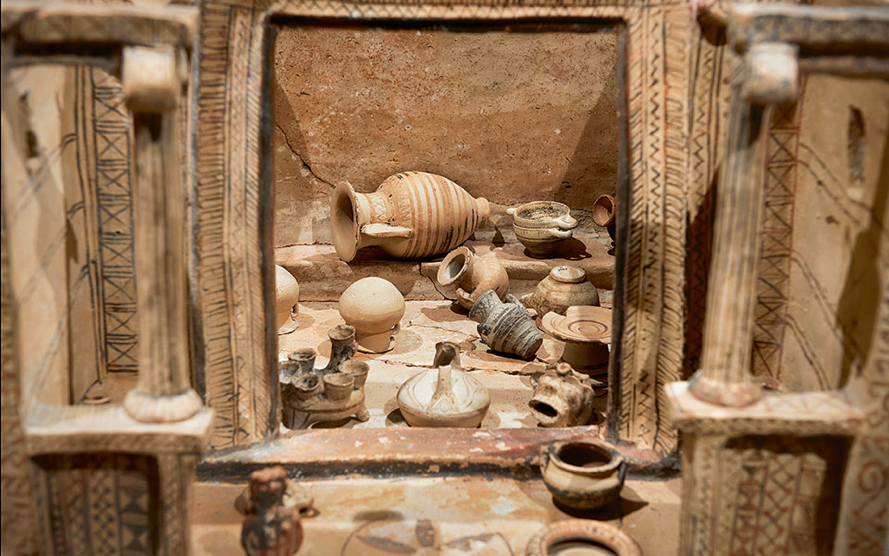 The fascinating historical exhibition “Cycladic Snapshots: Monuments and People” offers a look at the important excavations and discoveries of the French School at Athens and Greece’s Archaeological Service, from the late 19th century onward. Commemorated as well are the archaeologists, architects, photographers, conservators and tireless workmen who devoted their lives to unearthing, preserving and presenting the Cycladic islands’ ancient, Byzantine and post-Byzantine monuments. Photographs, archival materials, artifacts, wall paintings and icons illuminate the cultural riches found on Delos, Rhenea, Santorini and Naxos.

After its successful run at the Byzantine and Christian Museum in Athens,  this exhibition has been divided into three sections, the most impressive of which will be shown in the Archaeological Museum of Thera. It features some of the outstanding finds made by the late Nicholas Zafeiropoulos (Ephor of Cycladic Antiquities, 1959-1972), including a unique model of a house found in a woman’s tomb that was brought to light during his excavation of Ancient Thera’s Geometric-Archaic necropolis at Sellada (1961-1982). This model is a miniature version of a Theran house, with over a hundred everyday objects. The other two sections of the exhibition will be hosted by the archaeological museums of Delos and Naxos. 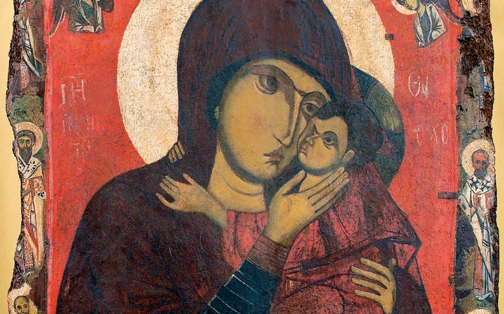 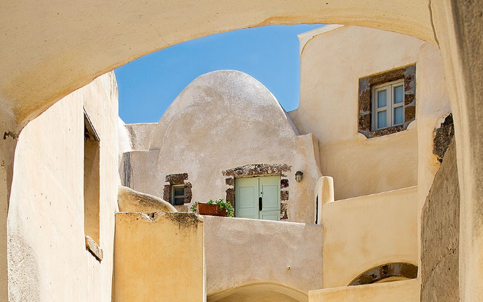 With the Crusaders’ victory over Constantinople in 1204, the Venetians moved into the Aegean. Over the next four centuries, Santorini gained a rich mixture of cultures, finding itself on the fringes of disputes between Byzantine, Venetian, Genoese, Catholic, Orthodox, Catalan and Ottoman powers. The larger settlements were stoutly walled. These “kastelia,” with gateways and “goulades” (watchtowers), stood at strategic spots – Skaros (Imerovigli), Oia (Castle of Aghios Nikolaos), Pyrgos (now Aghios Georgios Monastery), Akrotiri (Punta Castelli) and Emporio (pictured above). They later spread beyond their walls during more peaceful times. 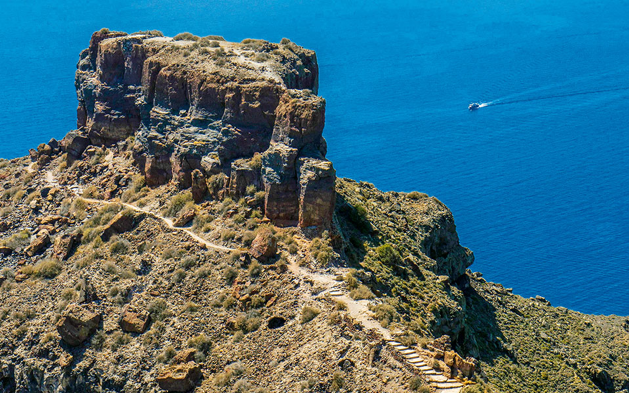 Skaros, west of Imerovigli, holds a commanding view over Santorini’s caldera. Today a desolate, ruin-strewn rock formation, it was once the core of a thriving Venetian settlement, with an Upper (early 13th c.) and Lower Castle (17th c.). Closely packed on and around Skaros were 200 houses, public buildings, Catholic churches, a cathedral and an Orthodox monastery (Aghios Nikolaos, 1651). The citadel was an impregnable refuge from pirate raids. Following destructive earthquakes, beginning with the 1650 event (associated with nearby Kolumbo’s eruption), Skaros declined. By the 1820s, it had been abandoned. 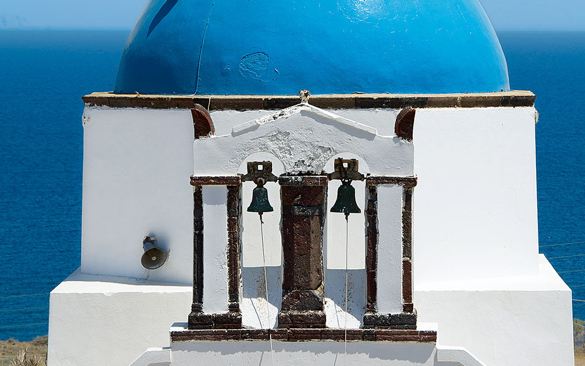 The Church of Panaghia Kalou in Pori (8km NE of Fira) is a testament to the resilient spirit of Santorinians in the face of numerous dangers, including Catholic and Muslim invaders, marauding pirates and violent earthquakes and eruptions. The islanders defended themselves both practically, living within walled towns or subterranean houses, and spiritually. To secure the Holy Virgin’s protection, Panaghia Kalou was constructed after 1649-50, known as the “Time of Evil,” when the undersea Kolumbo volcano (7km NE of Santorini) erupted, killing people and animals.

At sea, the age of sail was drawing to a close, while on land the age of industrialization was in full swing, with mining, textile production, tomato canning and wine exports all enjoying impressive growth. Wealthy families were becoming more “urbanized,” as they built mansions, imported lumber for their furniture, and slept on lace bedding. It is this period to which you will be transported as you enter the former mansion of wine merchant George Argyros, in Messaria. This stately building, constructed by local craftsmen according to plans drafted by Bavarian architects, was seriously damaged in the 1956 earthquake and remained in that state for 35 years until the Ministry of Culture designated it as a protected heritage property, paving the way for a lengthy and faithful restoration. 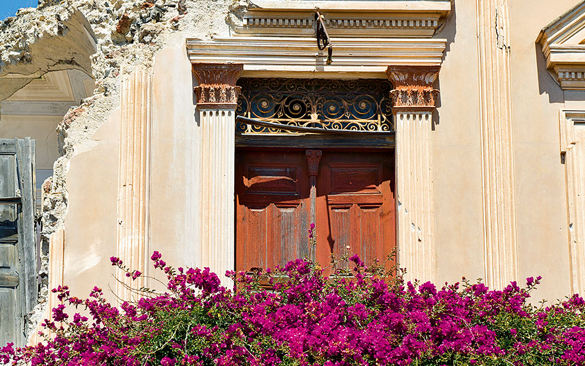 Sadly, many other notable structures on Santorini did not share the good fortune of the Argyros Mansion, and were never renovated. The earthquake, which measured 7.5 on the Richter scale and struck the island in the early hours of July 9, left many buildings half-destroyed and exposed to the elements. Just a few dozen meters from the Argyros Mansion in Messaria stands the Markezinis Mansion, with its wild bougainvilleas and jungle-like garden. Having partially crumbled to the ground, it now faces the threat of collapsing entirely. This house stands as a silent witness to a very different way of life, one abruptly interrupted. There are dozens of similar buildings in Oia, Pyrgos, Fira and Kontochori.

Two mid-20th century landmarks, open to the public, showcase Santorini’s industrial past to visitors. The first is the D. Nomikos Tomato Industrial Museum – SAF, in Vlychada, once home to one of the nine tomato canneries operating on the island. The second is Santorini’s first industrial winery, designed by trailblazer George Venetsanos, which was recently returned to operation. For a glimpse into the island’s mining industry, visit the Lignos Folklore Museumin Fira. In the brightly lit mine shaft below the museum, you can see how Theran pumice – a formidable, widely exported contruction material – was extracted.